Windsurfers’ dream town: Vasiliki A gift from the Greek God of Wind, Aeolus ,

Typical Greek airport awaits the tourists on the island Lefkada. To reach the small terminal building, you have to cross the runway on a tiny foot path. Inside, there is just one baggage carousel, one toilet with no toilet paper, and a few wooden benches. The upside: it’s quite hard to get lost there.

Outside, an abundance of taxis. I caught one and it drove me one hour south to the small village Vasiliki, where I would spend my summer working for a windsurf school.

I was told before that Lefkada is one of the greenest and most beautiful islands of Greece. Looking out of the window of the cab I started to understand why people fancy the island. I like to call it the “Tuscany of Greece”: a hilly landscape with earth-coloured Mediterranean houses, high diversity of plants, amazing beaches and the turquoise sea.

Aeolus, the god of wind in Greek mythology, offers the best gift for us: one of the best freestyle windsurf spots of the world.

Never-ever tried windsurfing before? The fever is definitely going to hit you in Vasiliki. The spot is mostly known by freestyle cracks, because of its nice flat water and strong wind in the afternoon. 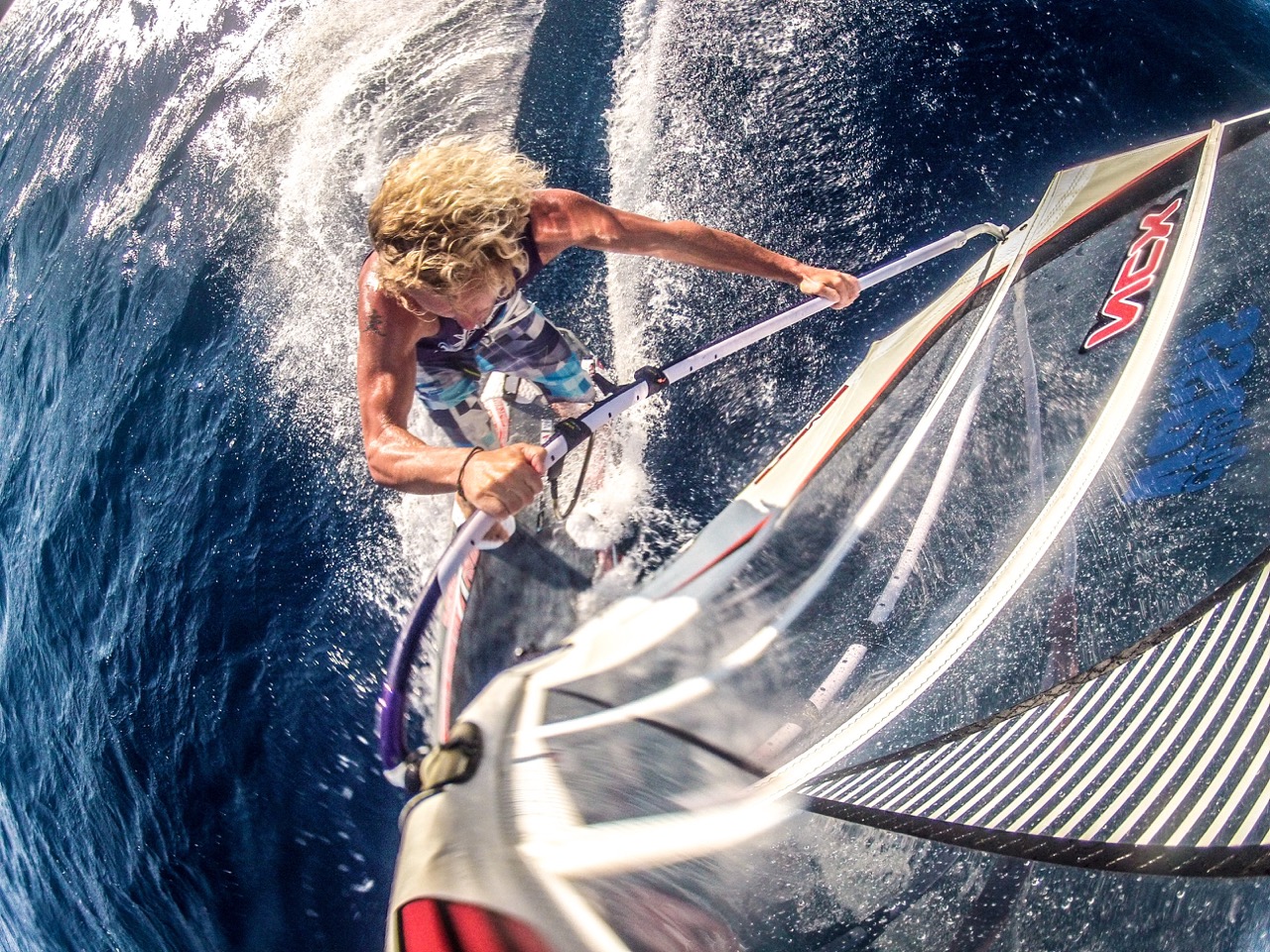 In the summer months, from June till September, you can be sure to catch a lot of windy days. One of the best features of this island is, that it’s a great place for both beginners and experienced surfers.

The typical day in Vasiliki starts with a light on-shore wind in the mornings – perfect for beginners – and after lunch, around 3 or 4pm, the wind blows side-shore around 4-7 bft. (That’s a lot of wind! Read more on the Beaufort scale.)

Before the turning point there is a strange short lull. During this time the air feels extremely hot and tense. The flags are suddenly turning and changing direction, and then you know that the natural forces came to life. It is so funny to watch all the surf addicts getting nervous and running to prepare their boards and sails.

My favourite time on the water has always between 6-9pm, when most riders have already left for dinner. The water is as smooth as glass, but there are still enough gusts to catch. After surfing, but still in wetsuits and so a bit freezing, we used to have a few drinks in the surf club. Great days… great team spirit! 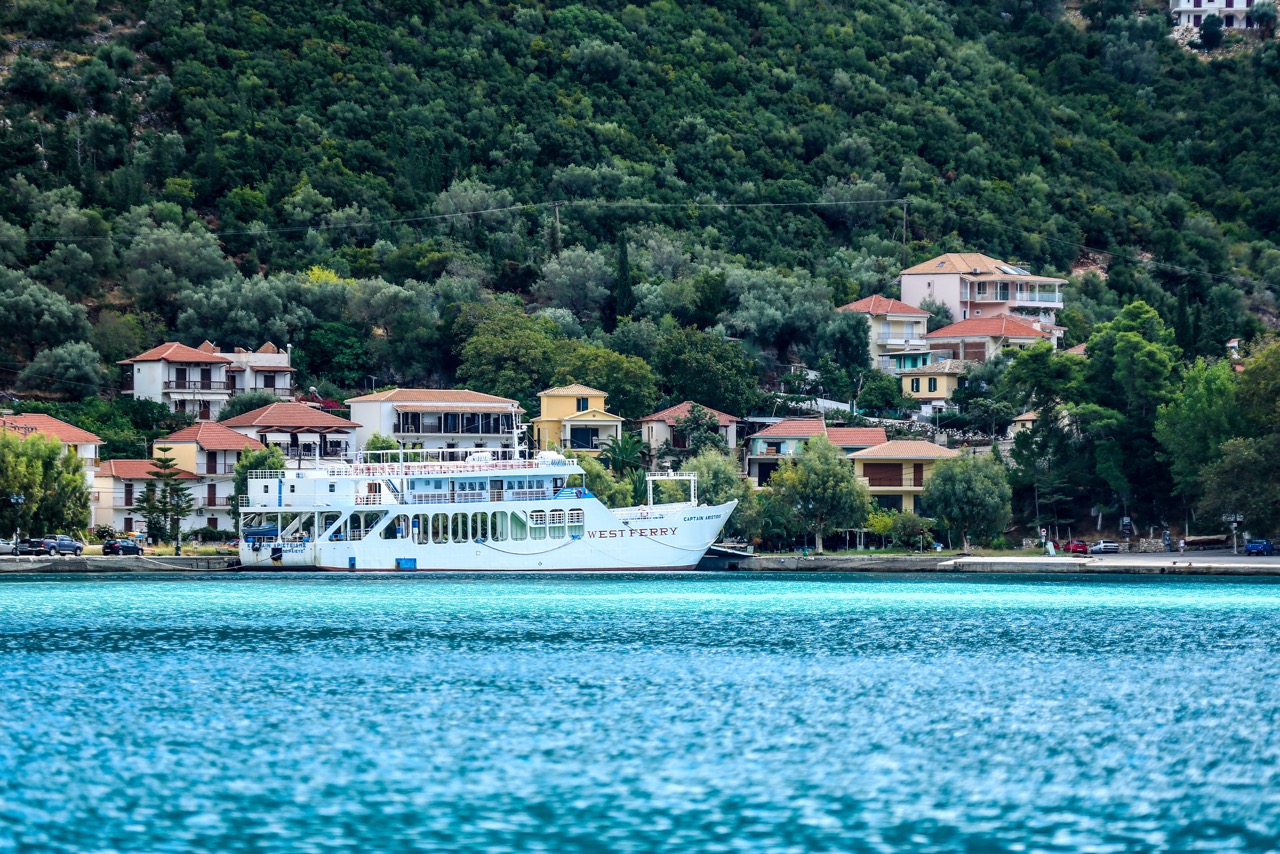 Be careful in the evening though, when the sun disappears behind the mountain: wind can suddenly drop this time, and you might need to be rescued.

There are five different windsurfing schools and one sailing school right on the beach. Most of them are English clubs, but there is also a German and a Greek one. The German school, “Human Sports” is a family place where a lot of Italians, Germans and Austrians like to spend their holiday. If you prefer more action and a lot of wild parties you should definitely stay at “Club Vass”, the biggest club of the spot. If you are a boat or catamaran sailer you are in the best hands at the sailing club “Wild Wind”.

Underwater or up in the hills

Besides water sports, Vasiliki is also great for mountain biking, because of its hills. Even some of the surf schools offer organised bike trips, but you are also free to just rent a bike and discover the beautiful island on your own. The best time to start a trip is in the early mornings, around 6am, because later the heat can make you suffer.

The bay is not best for swimming, because of the many windsurfers and the stones on the beach. Better to do a day trip to Agiofili, Porto Katsiki or Mylos Beach. You can reach those by boat or car, and can find beautiful sandy beaches with turquoise water.

Vasiliki is a rather small, but very charming place with its beautiful harbour, many cafes and restaurants. You can find some of the best restaurants and coffee shops along the harbour. My favourite one is Jomil’s Cafe, which you can find nearby the boats that arrange trips to Agiofili. Katherina, the Greek owner, makes you the best frappe while you relax on the cosy furniture. I used to go there on my free mornings to enjoy the calm, sleepy village. 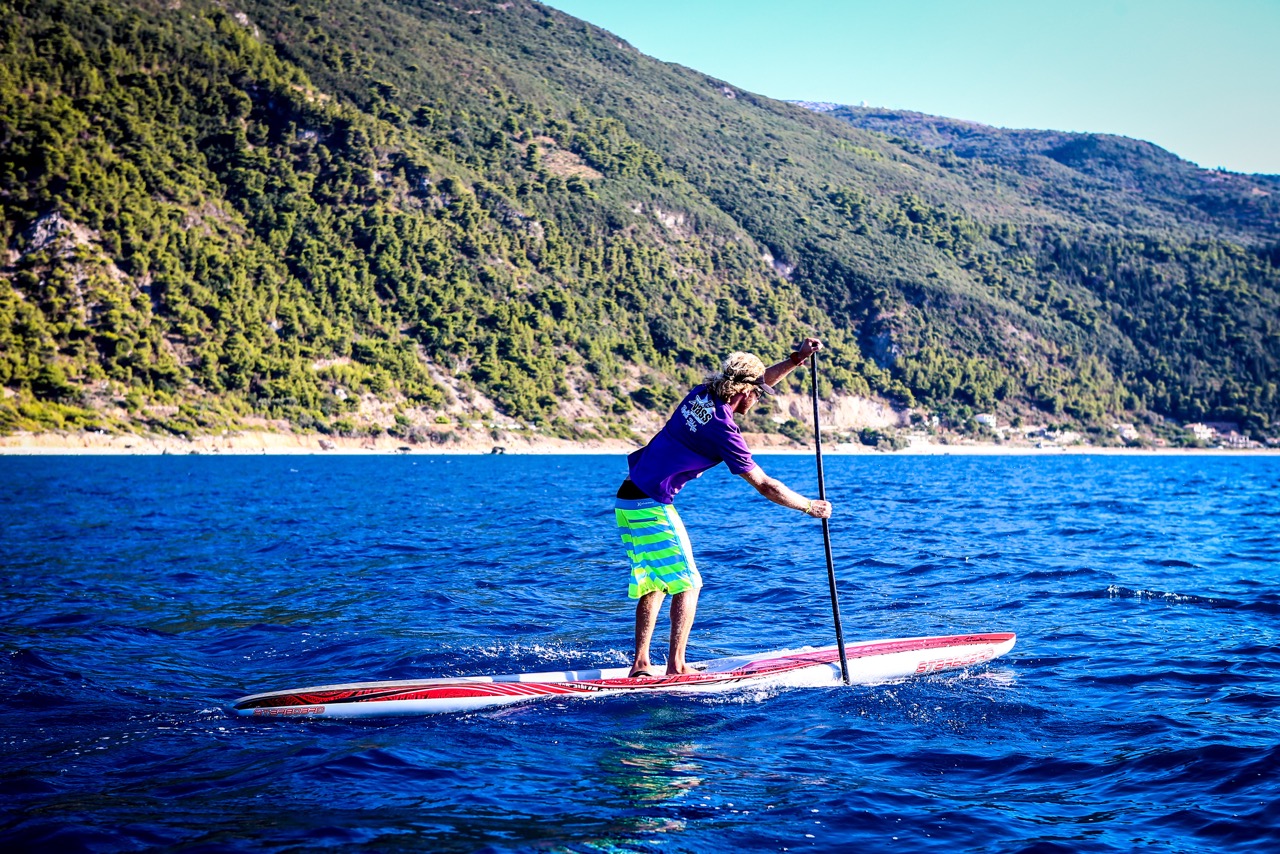 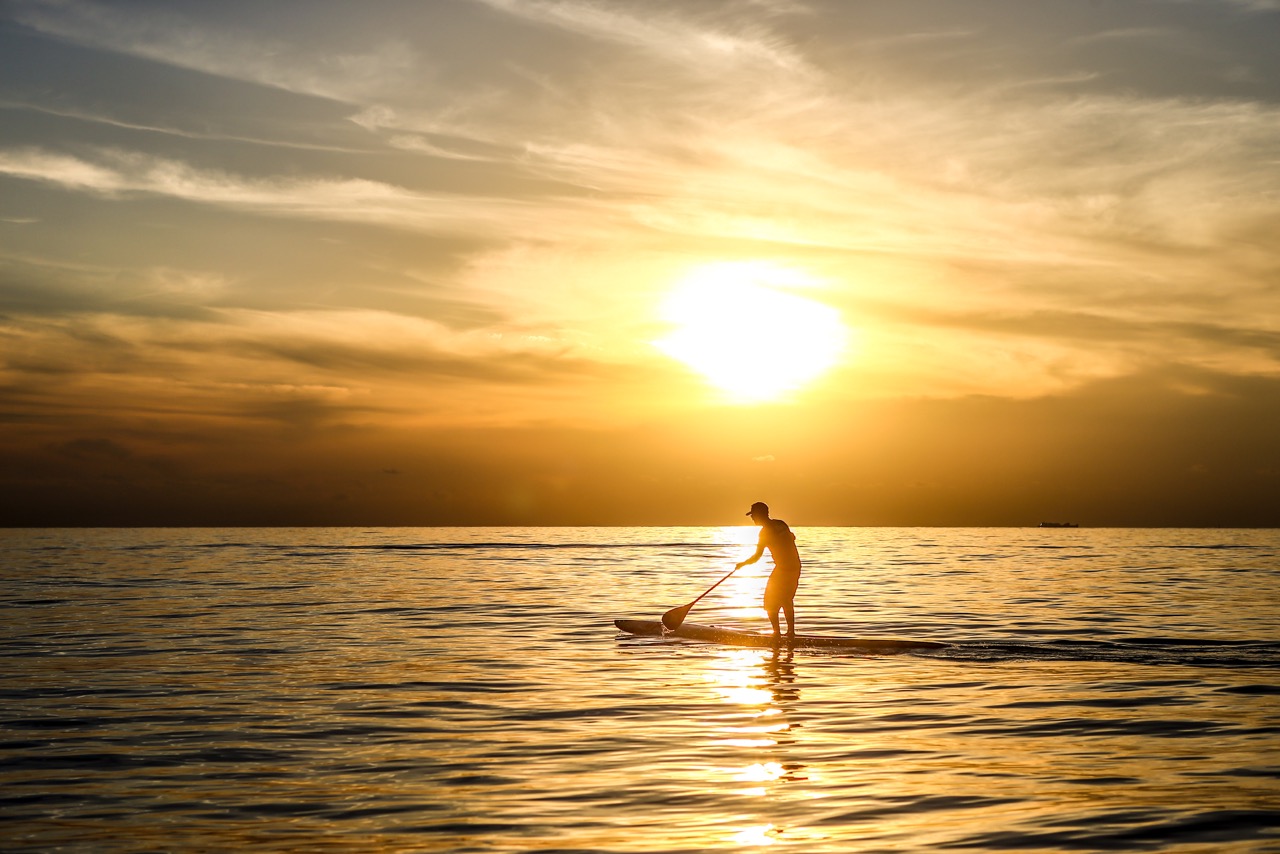 For breakfast, you should try the chocolate croissants or other delicacies from the bakery shops. You have to eat fresh fish at the restaurant “Ocean’s”, where they also serve typical Greek starters. Yummy! If you prefer pizza and Italian food in general, go to “Miramare”, which is located on the square. Ten minutes by car, in the small village Kontarena, the great and cheap tavern “The Old Plane Tree” is definitely worth a try. They serve huge plates of traditional Greek food, so you won’t return home hungry. On the other side of the bay at “Ponti”, you can find great seafood, for example at “Vasiliki wave”. For a drink after dinner go to “155”, where you will find nice chill-out atmosphere and amazing cocktails.

Saturday night in Vasiliki, 1 am, and the town vibrates. All party people, mostly riders meet at Zeus Bar, the one and only club of Vasiliki. There is no need for more options, because the parties there are definitely crazy enough. People dance on the bar top all night long, with UV colours painted all over their face. 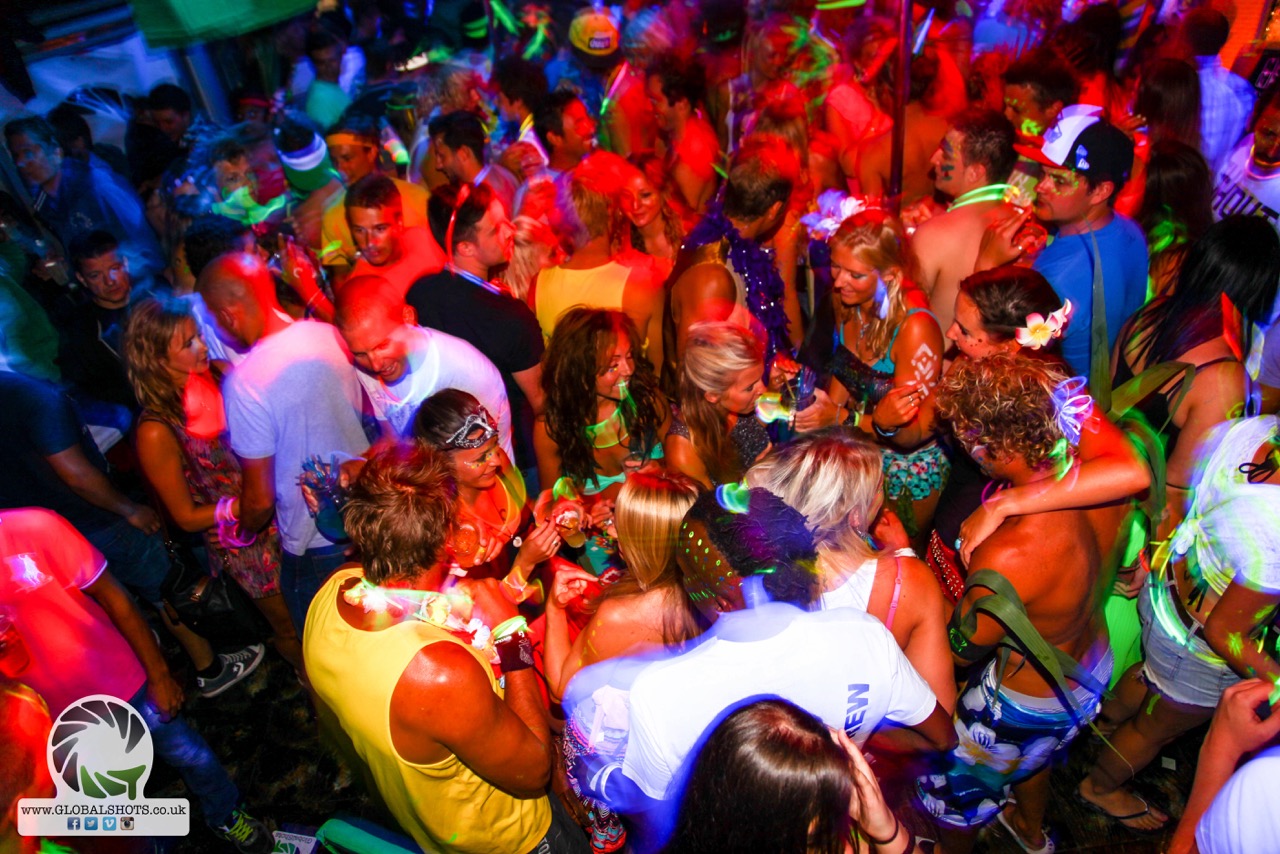 It’s very British, but they know how to rock the night. I had one of my best parties in my life there. It’s so different than a night out in my hometown, Vienna. Maybe it’s the heat. Or the sea directly beside the club. Or just the surfers’ vibe in the air, everybody still being high on adrenaline after a day out on the sea. Hard to describe the feeling, you probably just have to go there…

Some dates you shouldn’t miss

There are several rooms or studios to rent, and a small camp side directly at the beach. If you prefer more luxury, you can rent a villa up in the hills. Some of the cheapest apartments are not to be found on the internet – the best is probably to arrive without a booking, and find a place by asking around. Make sure to book in advance for August though, the peek month in Vasiliki.

After spending my first season in Vasiliki, I thought of trying another spot the next summer – but somehow this island seemed to have caught me and many of my friends whom I’ve met there. After spending four seasons on the island, I still come back for holidays. It’s a little like coming home.