Ready to Binner-Party Tobi from the Real Junk Food Project about food waste and how the movement is picking up steam ,

The Real Junk Food Project is a global network that rescues food waste from supermarkets, restaurants and businesses, and turns them into nutritious meals.

All their dishes are delicious and perfectly safe to eat, but the real junk cafés are not allowed to sell them directly. They operate on a pay-as-you-feel basis: people can eat for free, but are also welcome to give a donation of however much they can afford.

The Real Junk Food Project’s goal is to show people how ridiculous it is to throw away perfectly good food just because of a date on the package or a spot on one leaf. They feed people who have barely eaten for days just as well as folks in suits. Some of the projects run cafés cooking with surplus food on a daily basis or provide catering for social organisations.

“Globally, we discard over 1.3 billion tonnes of edible food each year”, says Tobias Goecke, founder & director of The Real Junk Food Project Berlin. “Just imagine: 1.3 billion tonnes of food! At the same time, over a billion people around the world are officially living in food poverty. What’s wasted in the western hemisphere alone could feed all people in need.”

The practice is picking up. The first real junk food café was set up in Leeds by chef Adam Smith just three years ago. Today there are over 100 cafés worldwide: most of them are in the UK, but the projects already reached the United States, France, Germany, Australia, Nigeria, South Africa and South Korea. 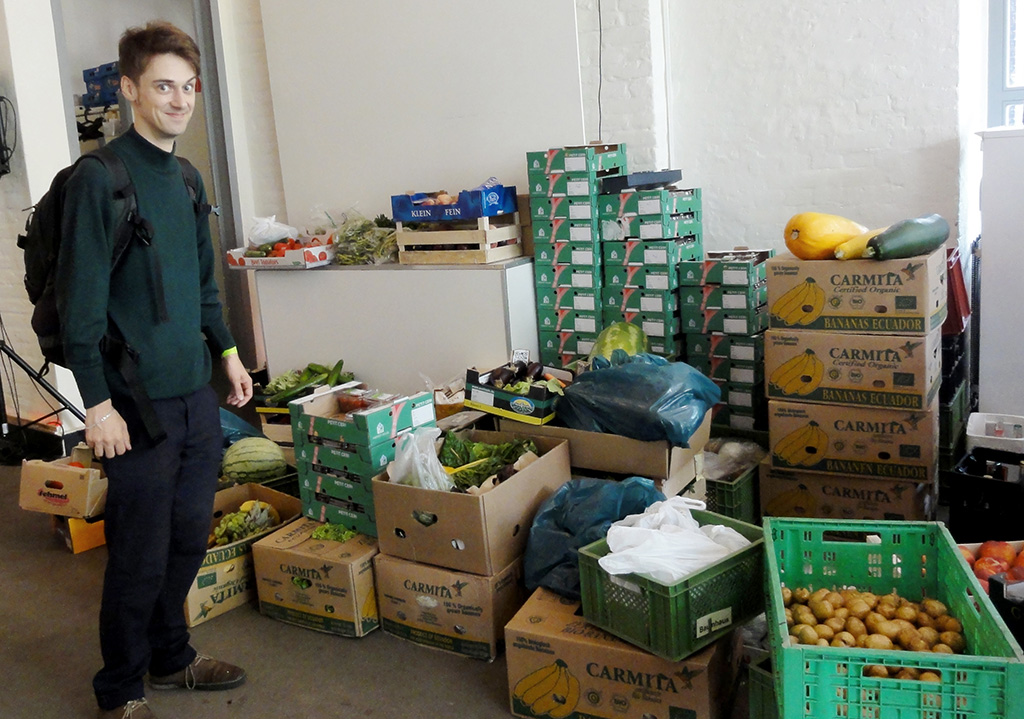 You could start a The Real Junk Food Project café too

“I emailed Adam and said I would love to do something similar in Berlin,” says Tobi about how they started out. “I wanted to find out whether The Real Junk Food Project has already set foot in Germany at all”. Adam replied pretty quickly: “We don’t have a Berlin café yet. Do you mind starting one?”

“We just had the baby, my wife and I were both in-between jobs. It seemed like a good time to start such a thing.” On the same day, Tobi set up a Facebook page and started to spread the word.

Soon it was time for a kick-off event: The Real Junk Food Project Berlin started with an open buffet at Prinzessinnengarten, a big urban garden in the heart of the district Kreuzberg. Tobi, his wife and a team of committed volunteers cooked for 80 people and the buffet-dinner was a great success.

Why is there so much waste food out there?

Businesses hate running out of food. For a store, empty shelves are a lost opportunity to sell, for a restaurant every unserved dish is one hungry customer. Leftover is the smaller problem then, which leads to a lot of wastage. 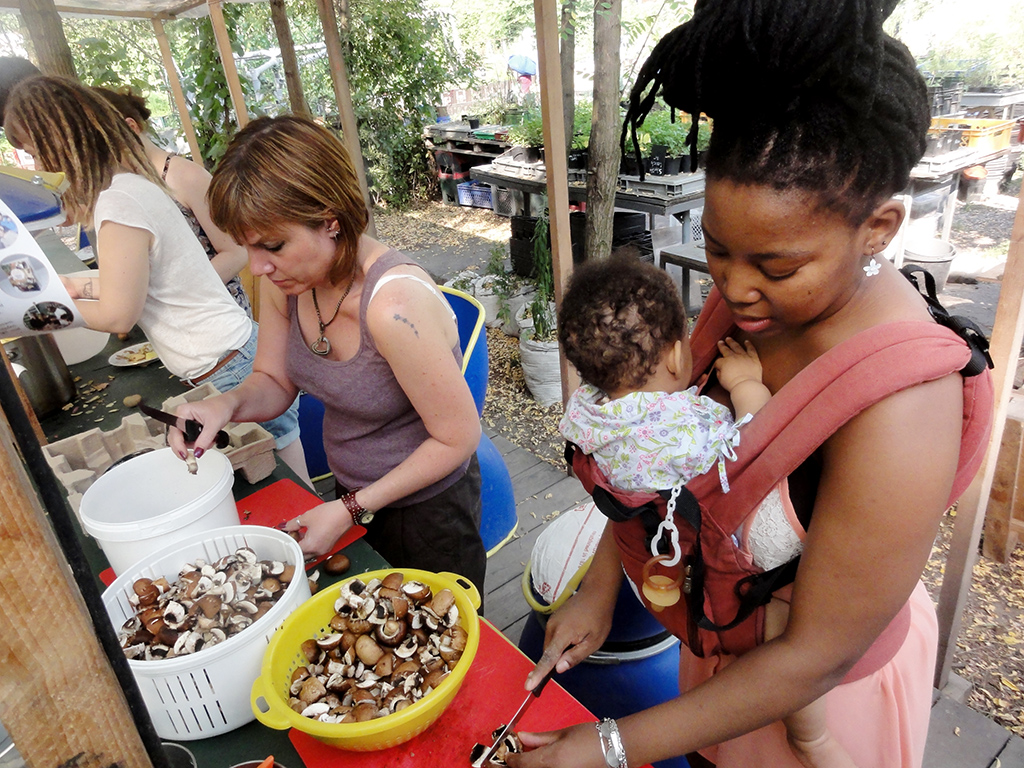 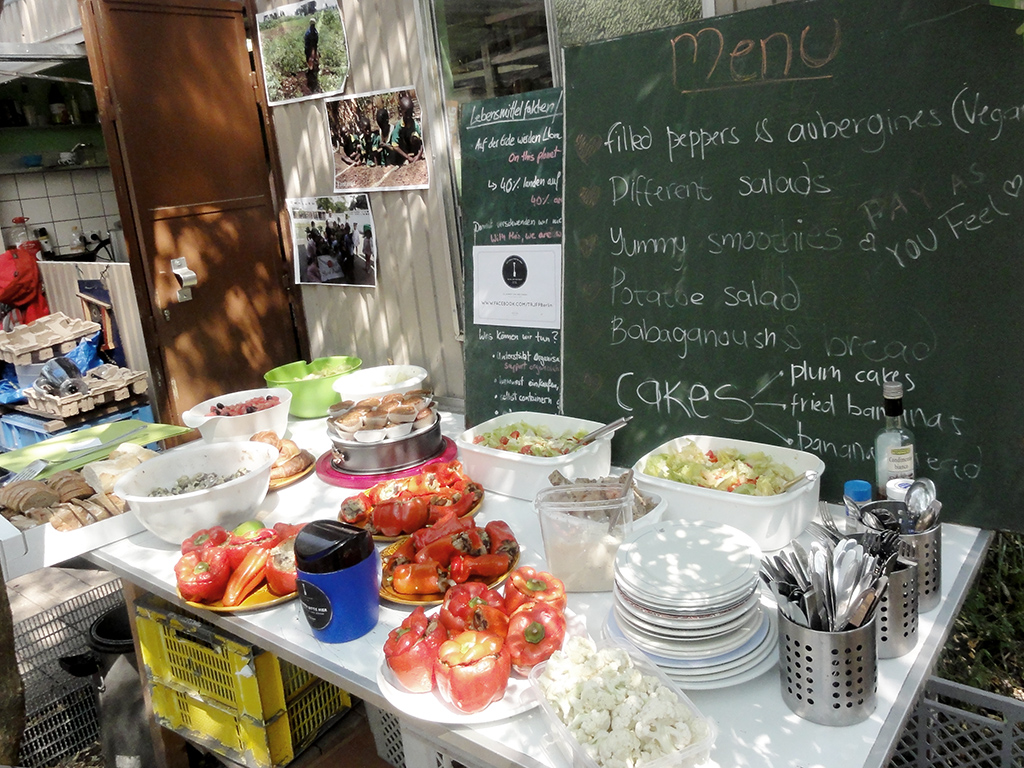 It’s illegal to use or sell food after the sell-before date, real recycling opportunities are either missing or are expensive, therefore restaurants and stores throw away food on a ridiculously large scale.

It’s not illegal however, to give the expired food away.

People still think that food waste is just a nice word for scraps and peelings.

“Most of the time we get vegetables or fruits, and a massive amount of bread,” says Tobi from Berlin. “Supermarkets these days have to offer the bread oven-fresh all day long, otherwise people wouldn’t buy them. The shelves have to be full in the evenings too – stores keep baking the bread even when there is next to no chance for them to be sold.”

There’s not much to do with the expired, rhubarb-flavoured yoghurt drinks, but most stuff can be used. There’s no amount of banana people can’t finish as a smoothie, but if the vegetables are unfit for human consumption, they can sometimes be used to feed pigs, or used on farms as fertilisers.

“There’s no shortage of food waste. At the fruit and vegetable wholesaler, for example, they have to throw out whole pallets of produce even when only one piece of fruit went bad. We source our ingredients from a larger pool, and now we can talk to the big guys as well: two of Germany’s largest organic supermarket chains are giving us their surplus food regularly.”

You just do it

It wasn’t always that easy to find help. When Adam Smith moved back to Leeds from Australia to start The Real Junk Food Project, he sent out thousands of emails to restaurants, shops, magazines. None of them replied.

They were left with only two choices: give it up, or get on with it anyway, without help.

Adam started to collect all the food waste he could find, and finally found a small café to work with. People started coming to the café, they spread the word, then more people came – it just snowballed from there.

“You just do it” is the keyword.

In Berlin, the project started only about half a year ago. They don’t have a fix place for the café yet, but have partnerships with other outlets.

Agora Collective is a hip coworking office and creative space in the even more hip district Neukölln. They collaborate with The Real Junk Food Project Berlin to convert surplus food into delicious daily lunch menus, offering these meals in the coworking café – together they’ve already rescued hundreds of kilograms of food waste, in just that one outlet.

The Berlin project is also invited to cook at events for refugee and social organisations like Refugio Sharehaus or the Ecologic Institute. These organisations share a common ground when it comes to fighting food waste and resource sustainability, so the already tasty food might taste a tiny bit better. 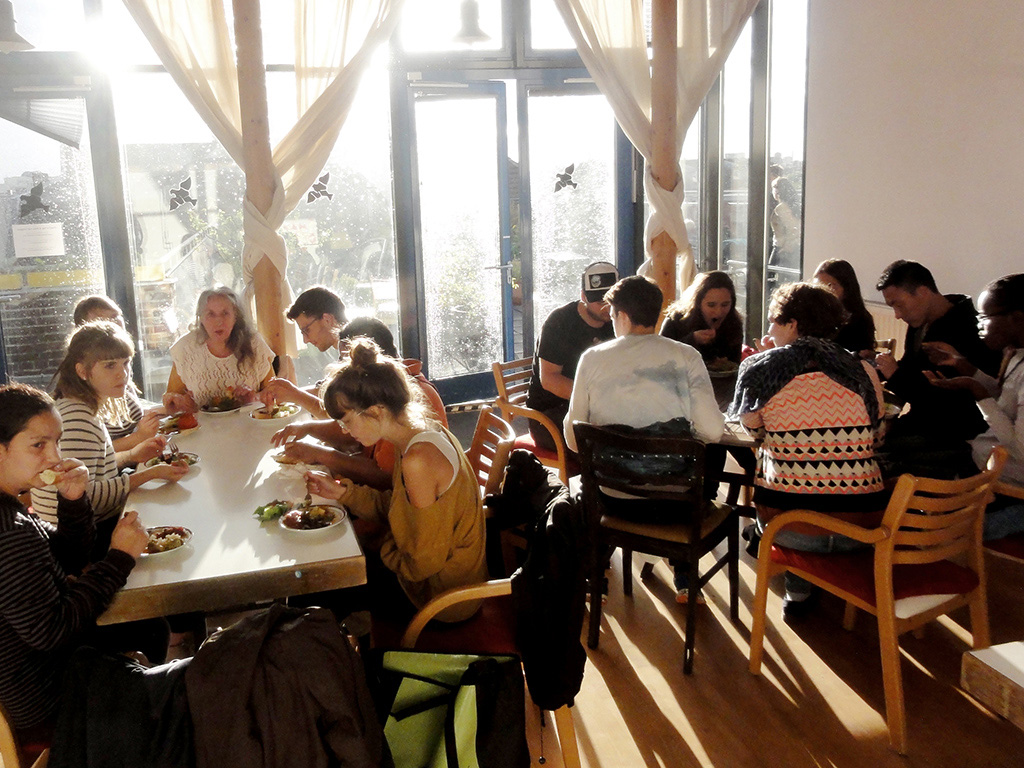 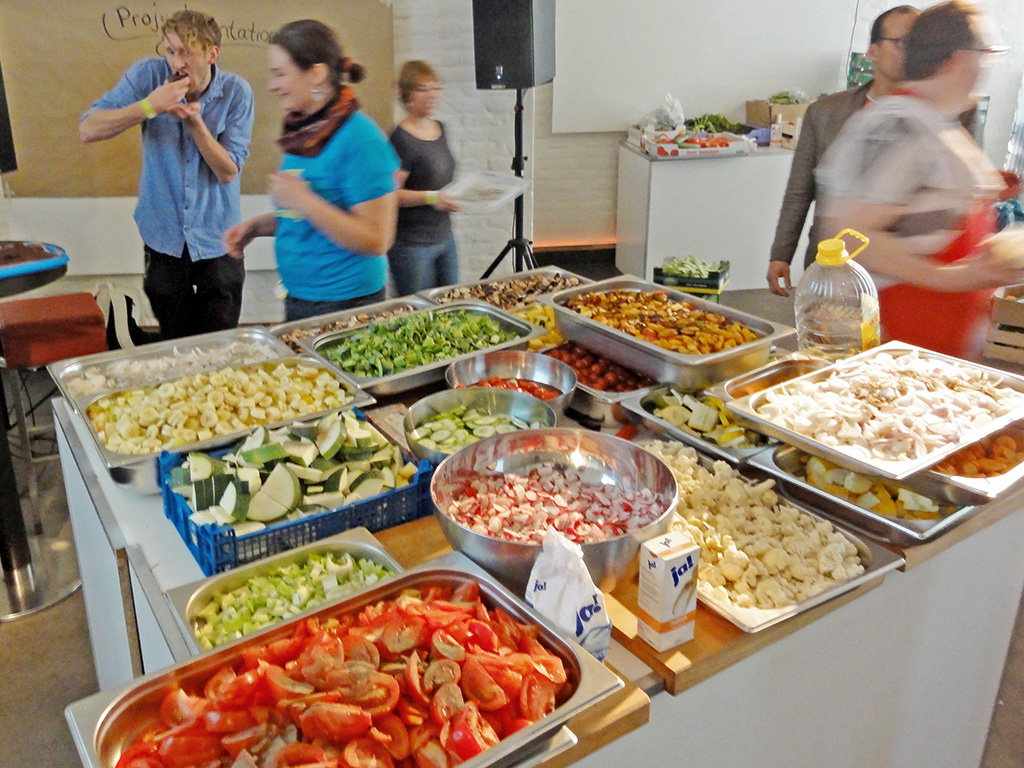 Tobi and the volunteers use everything in their power to get the job done. They organise pop-up restaurants all over town, redistribute surplus food to homeless or refugee organisations, and let boxes of food fill up private flats when there’s no storage space elsewhere. They operate on a grassroots level: talk to the supermarkets and businesses, go to wholesale markets — intercept food where they can.

“There is no such thing as too much food donations”, says Tobi. “We can find use for everything. If there is no event coming up or we get donated a lot of food all at once, we always know where to find people to make happy with it.”

In the long run, the Berlin team’s dream is to operate a food truck, which they can set up on any event and anywhere in town. It sounds to be a fair goal, although it might take some time to reach it. “Donations don’t bring in much money yet, we are happy to cover our costs really – but it certainly feels good to do something that has a positive impact on the world, and to see how many people enjoy our meals.”

How to start a The Real Junk Food Project café?

To join the network, a project must have a food waste element as well as a pay-as-you-feel option. Every café in the network keeps precise records of the surplus food they collect, and the numbers are overwhelming: the Berlin chapter alone has already rescued over 6 tons of food that would have otherwise been thrown away.

Apart from that, pretty much everything is up to the local directors: The Real Junk Food Project doesn’t want to dictate the rules for each individual project. Founder Adam Smith says, their job is to inspire and give hope, and the goal is to let the organic growth happen.

Alongside the cafés, some of local The Real Food Project outlets do offer catering, get their hands dirty in the community gardens or run guerrilla gardening projects. These local projects provide good service the their community.

Experimenting is key. Adam was a chef for nine years and cooked in restaurants all over the world. Before starting The Real Junk Food Project in Leeds, he already cooked with intercepted food in Melbourne: one day he went out to a public barbecue spot in a park with food he got from other people, and grilled free meals for everyone around.

Tobi also tells about his community cooking “Arrabbiata Sauce Nights” experiences in Cape Town. A community of expats and locals meet up on these nights and eat together: pasta with Arrabbiata tomato sauce. People bring boxes of pasta and tin-tomatoes to the event, so that there will be something to cook with for the next Arrabbiata Sauce Night too.

“Community is a strong element in The Real Junk Food Projects”, explains Tobi. “It’s always such a wonderful experience to cook together in our team of amazing volunteers. People from the most diverse backgrounds come together and cook. Every time it’s such a vibrant and warm atmosphere, with refugees, newcomers and local Berliners: we prepare great meals together, exchange Syrian, Italian, South African, Taiwanese and German recipes, eat, talk and fall in love – quite literally.”

The world is catching up

In Western Europe at least, food waste is becoming less and less acceptable. In a recent bill the French parliament required every large supermarket chain to give away food that’s either about expire or they couldn’t sell. It will allow one sixth of the country’s population, over ten million people to get food – and by 2025, the government wants to reduce food waste to its half.

Just a few days after the French parliament’s vote, Tesco, Britain’s largest supermarket chain said they will give away unsold food too: a handful of their stores will channel their food waste directly to nonprofit organisations.

Trying to deal with food surplus is nothing new. Some stores regularly sell the food that’s about to expire on extremely low price: Morrisons stores regularly have 9p (10¢) offers when they clean up their inventory.

What’s new is the public’s attitude towards food waste.

In Denmark, a new grocery store opened to sell only waste food — and people line up around the corner to buy some some. WeFood wants to break the stigma that waste food is only for poor people, and to underline their point, even a Danish princess showed up for the grand opening.

In Berlin, organisations like “Engel für Bedürftige” (“Angels for people in need”) run low-cost grocery stores where they deal with surplus food. They are one of the close partners of The Real Junk Food Project Berlin: the project delivers them food waste on a regular basis.

The goal is to go out of business

The change in how we think about food waste seems to have started then, but there is still a long way to go. According to the World Food Program, about 805 million people don’t consume enough food to lead a healthy, active life today.

Despite the fact that The Real Junk Food Project relies on food surplus to function, they would be rather happy to go out of business: they want all restaurants and organisations to be conscious about their waste.

Tobi says, “it’s good that they give their food to us, but it would be better to help them reduce their waste to zero. Even if it means we are not needed any longer.”

The Real Junk Food Project on the web