Thirst for power So Rad's Colin about how surfing dies while turning into a business ,

Ricardo Dos Santos was gunned down.

Ricardo Dos Santos died at the age of 25, in front of his Brazilian house, by the hand of an off-duty cop.

A bullet shot in the back, then another one in the chest. For no reason at all… The world-class surfer died in January 2015, and his story made worldwide headlines in the media even outside the surfing scene.

Tributes went on all around the web. Other professional riders shared their memories and thoughts, sent love and support to his family. Many heartbreaking posts on Instagram or other social media channels followed. “An incredible human being! He still had a whole life ahead of him”, wrote Carlos Burle, another top Brazilian surfer.

In echo to all this, I wanted to you tell a story too. A story that could have been told any other time, yet a story to remember this sick and awful time.

Surfing could have saved the World, but thirst for power destroyed it

In the mid-50s, surfing was a sport. Sorry, my bad: an art, in deep connection with nature’s forces.

In the entire world you could feel the vibes, the sharing… Sharing the love, sharing the ocean and its waves, sharing the fun and those joyful session with friends, long-timers or daily pals. Smiles wore on, laughs flew around and their resonance was vibrating way beyond the explosive sound of the beach breaks. 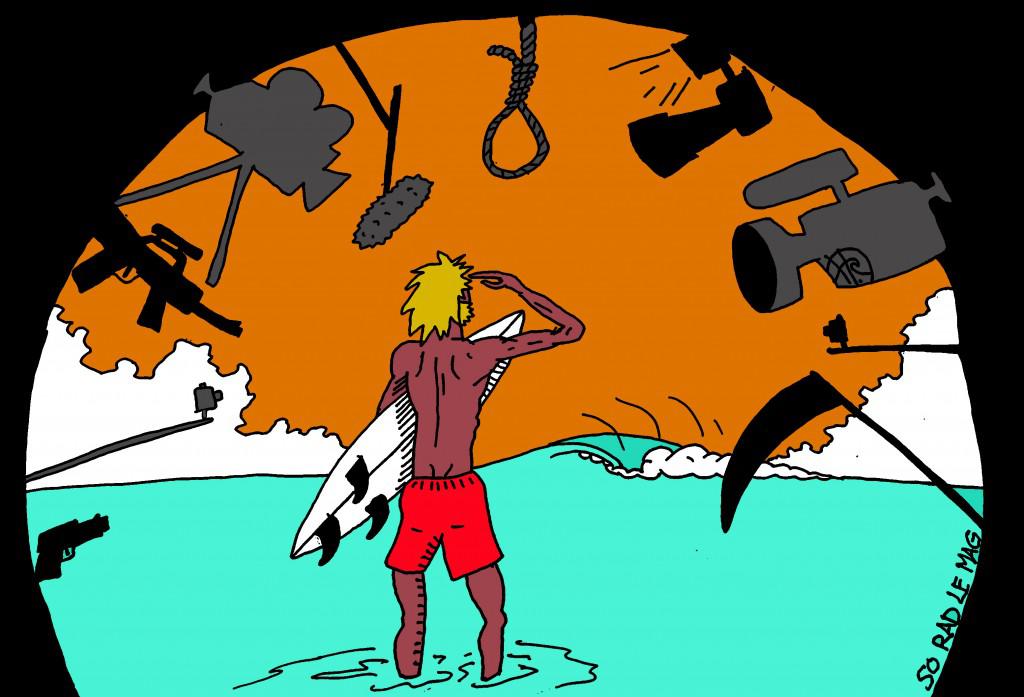 Surfing made people dream, because it was mysterious. Outsiders saw surfers as extra terrestrial beings, some cast-aways living in another dimension with an immense spiritual drive.

“Live as good as you can as long as you keep surfing everyday”, said the riders often.

Everything gravitated around the glorious and unwavering notion that the fun would save the day once again. One car for five-six guys, the home-made surfboards, a piece of garden to grow some seeds and exchange some of that for the weekly rice and bacon. No need to answer to anyone nor gods, their only rule was to follow the endless vibe that brings the wave ashore.

As hate-less, fearless and remorseless as you can get, misunderstood yet fascinating the crowds, they were living their dreams in this particular and unique universe that surfing is. And when there were no waves? You either dig up a skateboard somewhere or you just hit the road in an endless quest for the perfect wave.

Their lifestyle was pure, real, simple… Once again misunderstood, and yet again, authentic

The surf spirit changed in the 70s. Getting rich and famous became more important than riding some heavy swell.

The awful and soulless set expression of surf business grew deep in those free hearts. The exact opposite of the original surf spirit was spreading like cancer. This disease came from the very people who were living the dream of absolute freedom. But how can blame them? In a society where it was getting harder to live inside four rolling walls and under a tight roof, right by the beach.

So they started producing, advertising and selling while selling their souls step by step. In the same time more and more people got interested in surfing and dreaming about this all new and so sexy world of surfing.

When the word “performance” came up it was not clear anymore whether they meant skills or marketing. Some surfers responded to the aggressive new lifestyle with violence. They didn’t want to share the waves with strangers anymore. Others sold themselves to brands, to become role models for teens. Surf shops started to sell the pro’s clothes to all those kids. The original surf spirit went through a mutation to become a trademark, copyrighted by a bunch of surf companies.

The Iranian philosopher Daryush Shayegan said not long ago, that our godless and hi-tech-only world should reconsider all the myths, beliefs and truths from the ancient times. Our new world has banished the world of dreams from our existence. The modern man became disillusioned, picks up thoughts here-and-there without knowing the meaning of their own actions.

The surfer’s world can be related in some ways.

Live up to the surfer image

The gap is huge between what brands are selling and the sad reality where only a very few are able to live on surfing — and those people are pretty often not the athletes. Brands are killing the sports by tearing apart the ideal of surfing, selling out their riders like whores, and supporting them only as long as they don’t make trouble. That doesn’t leave much of the original surfer’s spirit.

Some survivors from those golden times managed to make a living the way they intended to. Despite remaining true to their code, they tied themselves to the system. When someone goes missing from the media — something which happens as soon as they step out of the right way –, the very same people start to complain. Instead of being happy and celebrate the return to the roots, where nothing else mattered but to surf and breathe. In the end, shouldn’t we all wish to return to anonymity?

We assume to know our world, but what do we know exactly? We know the one guy who is put on a pedestal by some media outlet, but who is this person really? Is he purely a product of marketing?

I’ve met an ex-pro-rider a couple of years ago, who was just waiting for any lame job opportunity. He was telling me about his childhood with a sad and bitter taste in his voice. He was dreaming of becoming a pro, scissored every magazine to carefully cut out pictures and articles to help him get to the top. Or so he thought. He attracted some sponsors, got himself to Hawaii… the kid was good! Then he met his idol. The role model that drove him this far.

The so-called hero didn’t even hit the water once: he spent his time getting laid and with hardcore parties every night. He didn’t even look at the kid who saw his dream permanently collapse within a few minutes.

A few years later, not being competitive enough to get good results nor pretty enough to get paid by his sponsors, the kid almost became a bum, lost his taste for riding waves and, almost his taste for life. He burnt his wings flying too close to the sun. Since then he got back on the water, enjoys the local surf session again, but everything still has the bitter taste of his stolen youth. And somehow, the brands are responsible for the death of a young pro-surfer whose only dream was to be like people in the magazines. One kid of so many…

Surfing could have save the world, but thirst for power destroyed it

The gangrene has reached the spine of the surf business. Poor quality stuff and thirst for more has almost overtaken what’s left of the original surf spirit. There is still some hope left to see the light again, and believe me, that hope remains in many hearts: even a few brands understand that, and started to head into the right direction. You can be sure though that power won’t let anything go away easily, and the day to bring back the Dream ain’t tomorrow just yet.

Ricardo Dos Santos died trying to make this dream come true. Many others knew this fate before him, and if guns and heavy drugs aren’t the ones to blame: the Thirst for Power always is.

To read more from Colin, check out So Rad magazine or read our interview with him in Issue 2.