A Walk "Life is beautiful, get over it" - Colin about living up in the mountains ,

Living in the remote part of the French Alps, in a small forest cabin among the mountains, surrounded by massive old trees and the smallest lake in Europe, my life became pretty simple.

Everything is quiet and slow. I don’t miss anything up there, maybe sometimes the warmth of a pub when, after a long day of axe yielding and wood picking, my body begs for a cold pint of the hand-crafted local beer.

The cold pint would come with the joyful vibe of an authentic, good-old-times pub. The one that used to be the nearest disappeared two years ago, together with the old grandma who owned it for the last 58 years. No one has had the heart since then to bring the establishment back to life. What a pity.

Living up there in the mountains, at a thousand meters high, means that it requires a twenty metres walk to get fresh water from a spring. The closest road is an hour walk away, and the closes village to an hour and a half. Once I’ve reached my car by foot, it would take another hour to drive to the closest city.

The Sun provides electricity which allows me to use my laptop for work, and the coniferous forest gives us plenty of wood to keep the dog and myself warm during wintertime.

Living at such a slow pace, I started thinking that using a car to go to the city was way too fast and too easy. I had to experience it, at least one time: the old-fashion way of traveling from a point to another. By my own two feet.

On 5 December I was ready. In the early afternoon I packed my bag, tied up the hammock and the warm reindeer pelt that I brought from Scandinavia some winters ago. I wore the warmest clothes I had and packed a few snacks plus three bottles of water. The snow was late this winter and the ground was crackling with leaves and dead wood.

The first leg was to climb up the mountain on a very thin and steep path to reach the pass, an altitude of some seven hundred metres higher. It took me two hours to get there, plus another hour of walking to find a nice place to rest and to spend the night, under the stars, on the top of this mountain and among a gigantic cloud-sea.

Walking in the mountains, I couldn’t help but notice the new signs, made of plastic and neglectfully nailed to a random tree – while the old signs fully captured the interest of my camera lens. Stylishly carved into the stone and painted with beautiful, colourful letters and numbers. Even the moss did not try to cover this work. The work of someone who took care of seeing his job properly done. The work of someone who knew that it would last long after his own passing. 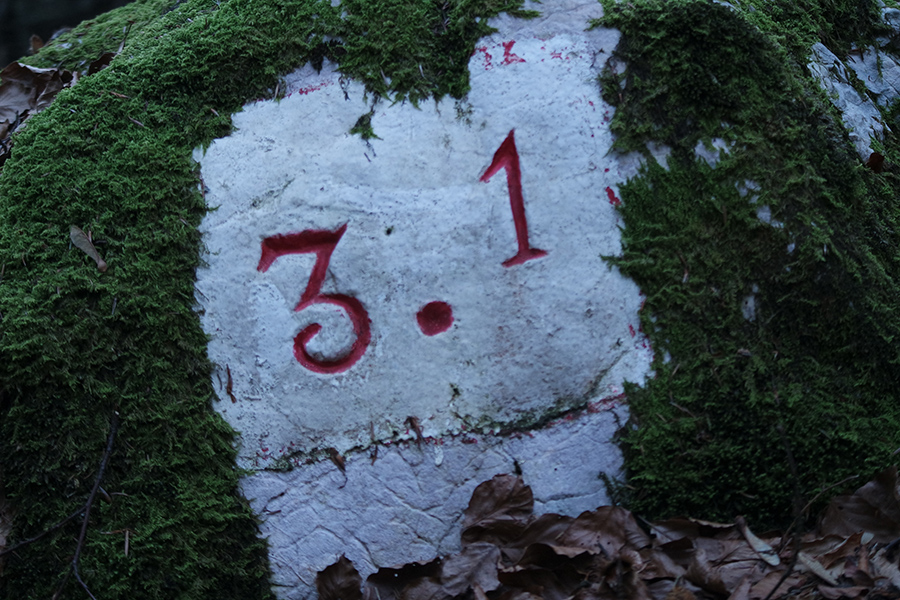 I had an approximate idea of how long it would take me to reach the city: more or less 15 hours of walking on the edge of the mountains. I’d need three days to complete it without being in a hurry. Taking time to enjoy every step and every bit of landscape. For years I was not able to walk properly. It had been a couple of months now that I was able to use my body according to my own terms, and I was feeling invincible. Well, as long as I was taking things easy, which I carefully did.

After a cold and windy night when I was safely covered and warmed by the pelt and the dog, I walked another six hours and reached the last mountain before the city. I spent another night under the stars, this time surrounded by the forest that replaced the breathtaking albeit frozen view from the night before. On the third day I was able to complete the walk with another three hours to reach my parent’s flat. Altogether it took me exactly twelve hours, split in three days.

It’s been a beautiful journey, yet, I should have done it the other way around. From the city to the cabin.

There is nothing more depressing than ending up in the urban area after spending so much time in the wild. Crossing it for the last two hours, the dog being tied to my waist, the pelt rolled up on the top of the backpack and the machete clipped to its side, I saw no one smiling. Not even one person wore this delightful grin on their face.

It was a Sunday morning and it felt like I was heading to a funeral. Joggers kept their head forward, not even throwing a look at me, let alone answering my greetings. Drivers kept looking at the red light, waiting for it to turn green so they could hit the gear and burn litres of gas to get their bread and croissants. I felt like everyone was starring. Yet, I caught no one’s glance. No one smiled back at me.

Right before I’ve reached my final destination, I finally saw one women in a red car who was clapping with her hands and smiled at me. This smile is the only thing that I will keep with me, from this last part of my little journey.

To read more from Colin, check out So Rad magazine or read our interview with him in Issue 2.